A Bone Marrow transplants is essential for her in emergency.
She is leaving the country tomorrow Friday 27th August 2021.

Kiara is the first child in her family, born on June 30, 2020. Unfortunately, the joy is short-lived: barely 8 months later, her state of health changed dramatically. In February 2021, she suffered from an allergy to cow’s milk proteins and a problem with constipation and blood was found in her stool, for which she was treated at Welkin Hospital by Dr Jutton and Dr. Kevin.
3 months later, on May 14, her doctors discovered that she had abnormally low levels of blood platelets and hemoglobins. In an attempt to cure her, she received a blood transfusion at Welkin Hospital. On June 16, 2021, her blood count again showed low hemoglobin levels. Following this, her doctors advised that a bone marrow biopsy be performed at St Victoria Hospital in Candos. From then on, this little girl has had to receive blood transfusions twice a week.

As her condition was not improving, a CT scan was done to establish the source of her illness, which showed Kiara had a large spleen which caused destruction of her red blood cells and platelets. Following this discovery, Kiara’s doctors opted for a splenectomy, which was performed by Dr. Kevin at Welkin Hospital. Unfortunately, Kiara’s hemoglobin and platelet levels remained low and her condition did not improve.

The reason behind Kiara’s illnesses was later discovered as follows: Kiara suffers from a metabolic disorder which causes her body to suffer from abnormal chemical reactions. These reactions prevent her metabolism, which is supposed to gain and / or produce energy from the food she ingests, from functioning normally: she has been deprived of producing the fuel her body needs to function properly.

The only way to help Kiara have a happy and healthy life is to get her a bone marrow transplant that she urgently needs to survive.
Below is an overview of the costs Reverend Enn Enn Sourir will have to incur to cure Kiara.

We are counting on your generosity to help us, and hope for the best. 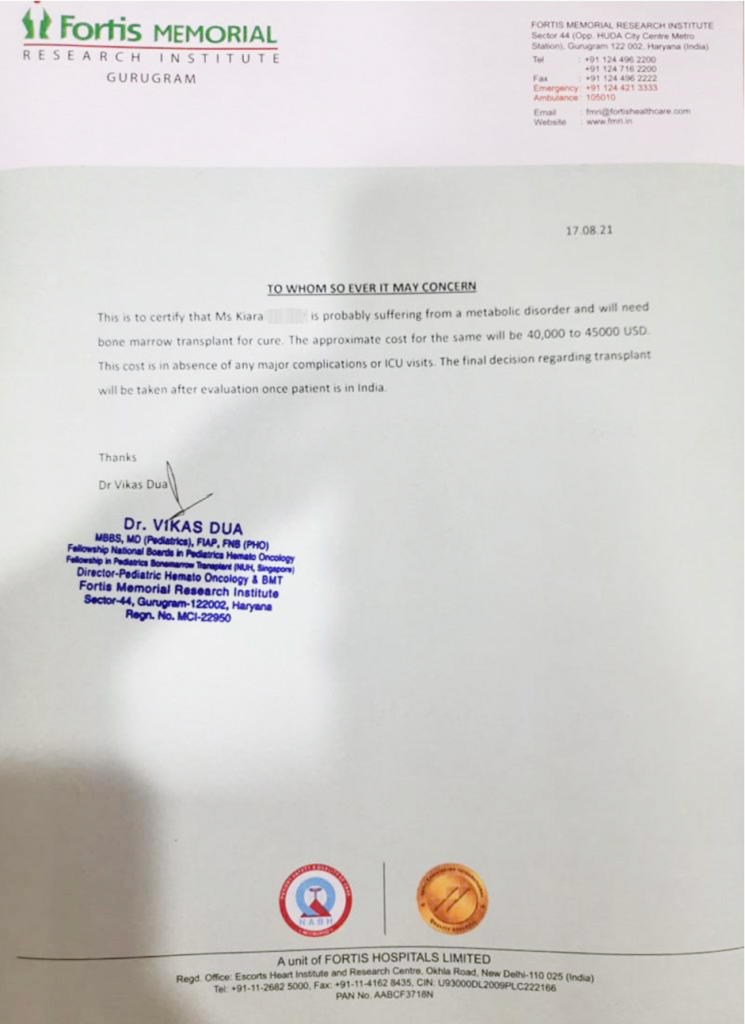